Nancy Bird-Walton
Pilot of the 1930s 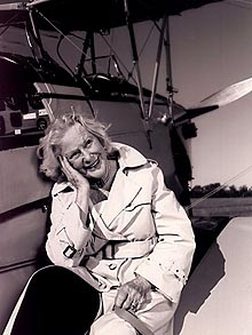 Nancy Walton was born in Kew, New South Wales, Australia on 16th of October 1915. Nancy was a teenager in the great depression and she was made to leave school at the age of 13, to help assist her family. She was one of six children with a father and a mother. Nancy was known for wanting to fly as soon as she could walk. Nancy was four when she attempted to launch herself off her backyard fence after she heard about the Great England- Australia air race.
When Nancy was 13 years of age she went for a joy flight in a gipsy moth aeroplane at a local fair, and that’s when her mind was set on being a pilot. She started saving up for flying lessons immediately.
At the age of 17 she had her first flying lesson, which was conducted by Sir Charles Kingsford Smith , who was a famous aviator, the first man to fly across the mid-Pacific. Despite her actions being unapproved by her father, Edward Bird, by the time she was 18 she was awarded a commercial pilot license around the time when women pilots were very rare, given that it was not normal for women to wear long pants in those days.
In 1938 Nancy bought her very own plane, a “de Havilland Gipsy Moth”. For some people this was the first time they had seen a plane let alone a woman pilot. Later Nancy was hired to operate the air ambulance for the Far West Childrens Health Scheme. For this job she used her own aircraft until she bought a better equipped aircraft. Nancy was heard to have told others that her work was rewarding but also very lonely.
When Nancy was 24 she married an Englishman Charles Walton, and had two children.
In 1967 Nancy gave up flying because because of her age and she  wanted to concentrate on her family but was still working and trying hard to keep all of her planes neat and clean.  Nancy Bird-Walton died at the age of 93 in January 2009.